Take a tour around the new Montgomery: The menus above will lead you through the monuments and museums. You'll hear from members of St. Paul's AME (Rosa Parks' home church) and navigate 360 views of the city's landmarks.

The steps of the Alabama State Capitol building in Montgomery have long been the place for significant speeches and occasions.  With few exceptions, Alabama Governors have been sworn in on the steps since the capitol was relocated there in 1846.  The site became a spot of eternal notoriety, however, in 1861, when Jefferson Davis was sworn in at that location as the first and only President of the Confederate States of America - a bronze star still marks the spot. While standing on that star, the Little White House of the Confederacy and an elaborate war memorial are positioned behind the speaker. But looking 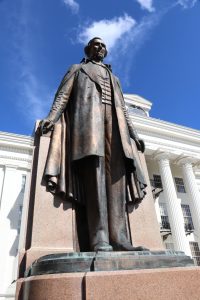 down Dexter Avenue today, in the same place George Wallace vowed “segregation now, segregation tomorrow, and segregation forever," the Confederate legacy has been countered. First with Martin Luther King, Jr‘s speech below the capitol steps at the conclusion of the Selma-Montgomery March in 1965, and later with counter memorials:  the dedication of the Dexter Avenue King Memorial Baptist Church as a national historic site, the Civil Rights Memorial at the Southern Poverty Law Center, the Rosa Parks Museum, and the Freedom Riders Museum.  Recent years, however, have seen the establishment of markers that acknowledge the legacy of slavery and lynching. The Steps bearing the bronze star no longer direct the rhetorical gaze to the antebellum past and the attitudes of Davis, Lee and the lost cause, but to the dream envisioned by Martin Luther King, Jr.